Skip to content
HIV Cure or Treatment. What is the difference?

H.I.V. Is Reported Cured in a Second Patient– reads a headline in the New York Times. The article reports on a recent publication in Nature, which presents a case of successful bone-marrow transplant used as a treatment against the human immunodeficiency virus (HIV) infection. Successful treatment- yes, but to call it a ‘cure’ is incorrect. The Mississippi baby, the Essen patient, the Boston patients – all at some point hailed as ‘cured’ HIV cases, are now all examples of calling the shots too early. In all cases, the science behind the treatment and the cause of relapse is fascinating and has advanced our understanding of the virus greatly, but so far there is only a single known case of potentially cured AIDS case- the Berlin Patient. The last week’s publication has led to multiple ‘cure for HIV’ headlines, but while the research achievement is certainly worth the applause, we should stray away from calling it a cure, as that is not what the research or the past experiences shows. 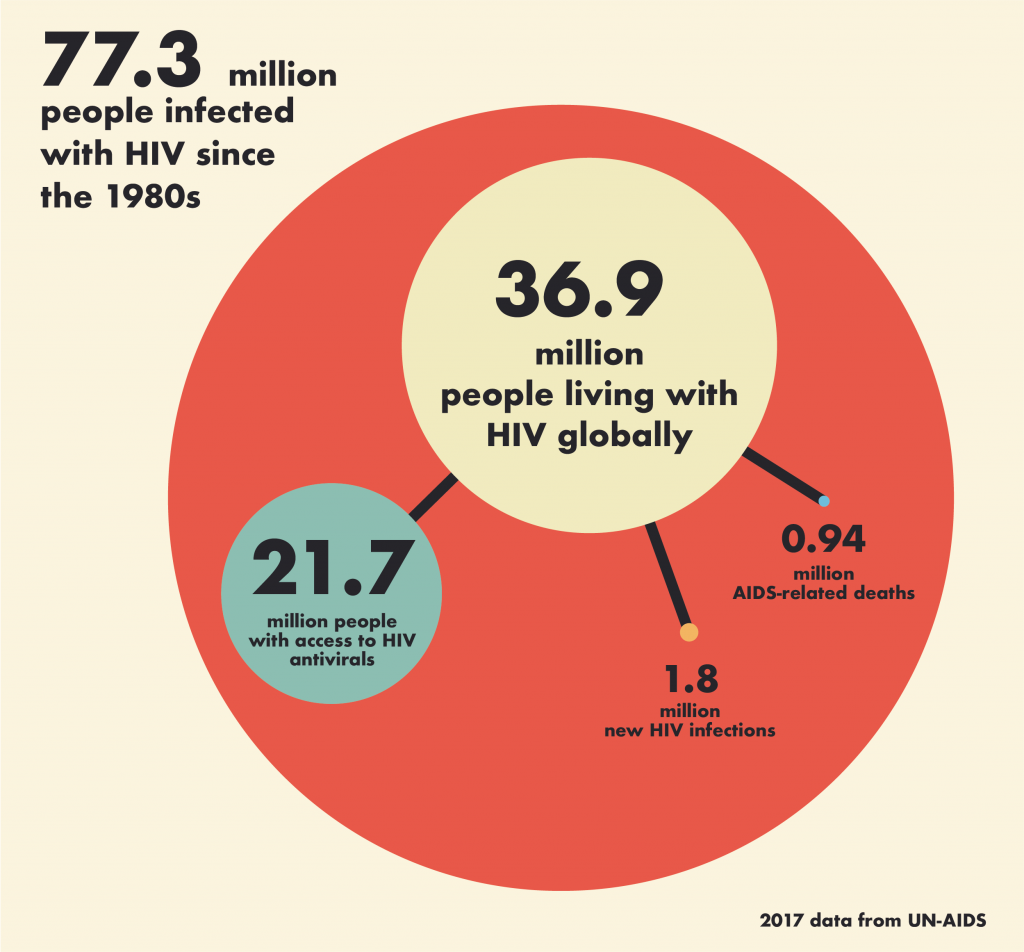 In 1981, a sudden increase in cancer and pneumonia cases among the gay men population was noticed in the US. All patients also carried a mysterious illness that was associated with a pronounced suppression of the body’s immune system. The mysterious condition was later named acquired immune deficiency syndrome (AIDS) and, before antiviral drugs became available, the life expectancy of those affected was just 12 years. In 1983, first papers where published in Science identifying the causal agent of  AIDS – the human immune deficiency virus (HIV). HIV is transmitted sexually, through blood or through the mother’s milk and the current best treatment for it is the so-called ART therapy, which is a cocktail of antiviral drugs targeting different stages of the viral life cycle.

While these days ART can extend a patient’s life almost to the age of a healthy person, it is by no means a cure. Antiviral drugs are expensive, people have to take them every single day for the rest of their lives and there is no guarantee that the virus will not acquire mutations that make it resistant to the drugs. The ability to acquire mutations is the key to understanding why the virus is so good at evading the body’s immune responses. Due to somewhat faulty replication machinery, each time an HIV virus copies its genome it has a high probability of introducing new mutations in it. The mutations will lead to changes in the viral protein structure, which will prevent the immune system from developing long-term responses to the virus. And, if sneaky evasion of the immune system was not enough, HIV prefers to infect the same immune cells that are supposed to be fighting the infection, It can also lay dormant in those cells for years, waiting for the right conditions to reveal itself. Summarising, HIV is a real Trojan Horse. 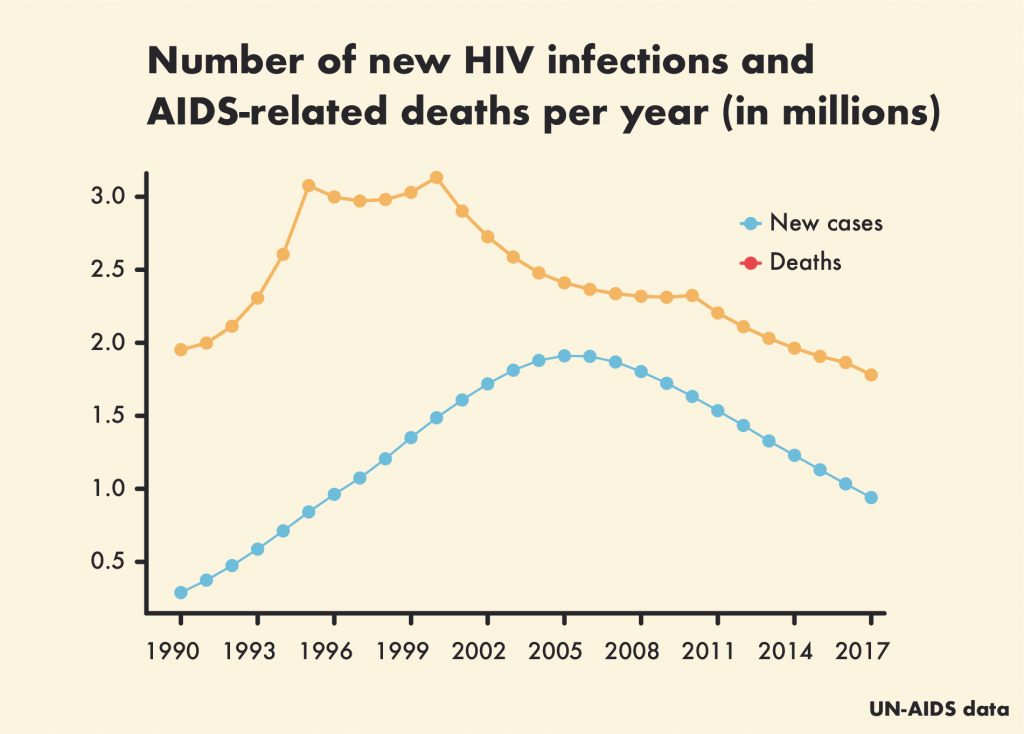 The holy grail of HIV treatment is of course a development of a vaccine against the virus. However, while multiple vaccine trials have been conducted, the prize remains elusive. In the absence of a vaccine, various treatments have been sought, and over the years, cases of people who have apparently been ‘cured’ of HIV have hit the media headlines- only to report back a few years later that the patient has relapsed, and the virus has remerged. The Mississippi baby was a case of a newborn baby who had acquired HIV during the birth and immediately went on an antiviral treatment. At almost 2.5 years of age the Mississippi Baby was declared virus-free, but sometime after the antiviral treatment was stopped the Trojan Horse emerged. Several patients in Boston have also been declared ‘cured’ after they received bone-marrow (BM) transplants as a treatment for AIDS-related blood cancer. Given that BM cells are both potential hosts for HIV and are responsible for creating new immune cells, BM replacement not only treats the blood cancer, but can potentially remove HIV from the system. The Boston patients opted to stop their antiviral use after the transplantation and for a while appeared to be virus-free.32 weeks later the virus was detected in their blood.

So far, the only HIV case that scientists themselves have referred to as ‘cured’ is the Berlin patient- Timothy Ray Brown. Timothy was confirmed positive for HIV in 1995 and in 2006 was also diagnosed to have a type of blood cancer called acute myeloid leukaemia. Timothy’s doctor Gero Hütter had advised him to proceed with a BM transplant to treat the cancer. Then Hütter went one step further and found a matched donor for Timothy whose BM cells had a special mutation in them. The special mutation is called delta-CCR5 and it refers to a small deletion in a cell-surface protein called CCR5. The mutation is present in around 1% of Caucasian population and does not seem to have any negative effects on the people who carry it, in fact, it might give them an advantage. As it happens, CCR5 protein is also a major receptor needed for HIV to enter its host cells during infection. When the virus first encounters a cell, it interacts with it through the CCR5 receptor in a lock-and-key fashion. There is a perfect match between the viral surface proteins and the surface of the CCR5 receptor, so when the two meet a key is turned and the virus can enter the cell. However, if the lock is slightly damaged, just like in the case of the delta-CCR5 mutation, the entry not possible and the host cell becomes immune to HIV. Gero Hütter hoped that a BM transplant using cells with the delta-CCR5 mutation in them, will cure Timothy of cancer and make him resistant to HIV. Since Timothy went off the antiviral therapy in 2008, no replicating virus has been detected in his blood and he has been considered ‘cured’ of HIV.

The recently published report about the London patient describes a case very similar to that of the Berlin patient. A cross-university team of researchers and clinicians have shown that an HIV-positive patient, who received a bone-marrow transplant to treat his Hodgkin’s lymphoma, at the time of the reporting had no detectable virus in his body. The transplant was also performed using a delta-CCR5 donor and 18 months later, without any antiviral use, the patient appears to be in HIV remission. Remission- that’s the word used in the report, not ‘cured’ not ‘completely free’ but in remission. Hurray! It’s an amazing achievement, but remission is not a cure. While ‘remission’ may not sound as sexy as ‘cure’, the two words are not synonyms either. Remission means a ‘disappearance of symptoms or cessation of the activity of a disease for a period’ and, given the many previous cases of misreported miracle cures, we should be very careful to use the right words. It is important to talk about the achievements and discoveries in science but overblowing the findings is not the right way to do it. 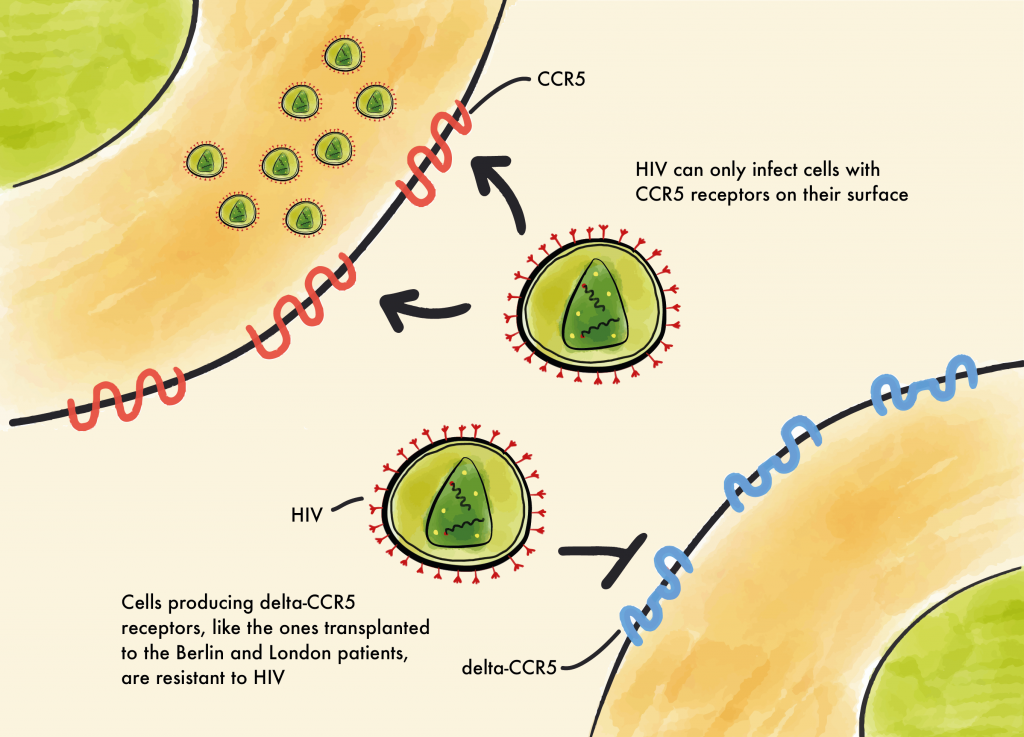 Is a cure possible?

The only true answer is that we don’t know. So far, there is an n=1 of cured HIV cases and even then, there is some semantic debate over what the term ‘cured’ means. Reports have suggested that small traces of HIV genome can still be detected in the Berlin patient, but the virus does not appear to be replicating. Therefore, some researches now talk about the concept of “sterilising cure”- the complete elimination of the virus, versus “functional cure”- the suppression of virus to the point where an antiviral treatment is not necessary. The new London case, as the researcher put it: “demonstrates that the Berlin patient was not an anomaly”, and suggest that BM transplants using stem-cells have a potential for a new way of treating HIV infections. In reality, though, a vast majority of the 36.9 million people living with HIV  will not be able to get the BM transplants. Furthermore, BM transplants are complicated procedures with variable success rates in which a positive outcome is never guaranteed. HIV research has come a long way since the virus was first described and the patient treatment is becoming ever better, but prevention is still the only real cure. We should choose our words more wisely.

Bernadeta Dadonaitė is currently studying for a MSc in Science Communication at Imperial College London.