Skip to content
In part 3 of our Diary of a Researcher series, we take a look at how Imperial physicists are recreating the conditions of space, on Earth.

In the third part of our Diary of a Researcher series, MSci physics student Meriame Berboucha tells us how the conditions of space are recreated at Imperial. Sound impossible? Read on.

A journey into outer space is very difficult. It requires rockets, lots of fuel, a large team of outstanding brains and carefully thought-through maths and physics. Thus, learning about the driving-forces behind some of the phenomena in space can be very difficult – especially if it means venturing out there to collect data. Firstly, it is huge and we currently don’t have the technology to go out to the far reaches of space. Secondly, space is a vacuum and full of extremely hot bodies, like stars, that emit radiation harmful to the human body. Thirdly, all the celestial processes extend beyond the human lifespan. It’s impossible to observe all the changes, because astrophysical events happen over hundreds, thousands, and sometimes millions of years. All in all, space is a very hard thing to study and doing a lot of ‘on location’ work is essentially impossible, but nevertheless, effective methods of research have been created.

Normally, space is studied via looking at and analysing the light that comes from space. This light has stored information which, when we analyse it, can give us vital information about certain regions of space. This was the way we discovered helium, for example: By looking at the Sun’s light or as scientists call it, spectra. It is also how we learnt more about the expansion of space. It is an extremely effective method, but doesn’t always provide the information needed, for example when we want to find out about the dynamics of huge astrophysical jets from super massive black holes. These jets are large, powerful streams of particles and radiation, which travel at light speed. The particles are ejected in the form of a plasma, the fourth state of matter.

Although plasmas make up 99.999% of the observable Universe, we are used to seeing solids, liquids and gases in our everyday lives. To get from a solid to a liquid you heat up the solid – for example, heating up ice to make water, and so on until we get a gas. If we were to heat this gas to even higher temperatures, we would get a state of matter where atoms can no longer exist and this is when plasma is formed. The gas is heated so much that electrons no longer bind to their respective nuclei and you get a ‘soup’ of ions and electrons all whizzing around each other. Scientists like to think of a plasma as an ‘ionised gas’. What’s really interesting about them is that they are affected largely by magnetic and electric fields. Because the electrons and ions are charged particles, electric fields cause them to accelerate, and magnetic fields to move in circular orbits.

Studying plasma would be difficult if we were to just look at the light that is emitted. We could get information about the temperature and wavelength of the radiation it gives off, though information about the speed of the particles and the plasma’s properties would be hard to obtain. We need another way of seeing how this plasma behaves in space in order to learn more about the universe we live in.

So what if we were to bring the far reaches of space to us? If we recreated the conditions of space in our labs? Sounds ridiculous, right? But it happens to be reality: Some of the scientists at Imperial, the ones you see down the walkway, in the SCR and on Queen’s Lawn eating their lunch in the summer, recreate the very extreme conditions of space, in their labs!

This mini ‘space-maker’ is called MAGPIE which stands for Mega Ampere Generator for Plasma Implosion Experiments. Spanning over two floors, MAGPIE is the largest university-based pulsed power machine. An average-sized researcher looks tiny next to the mighty MAGPIE machine. 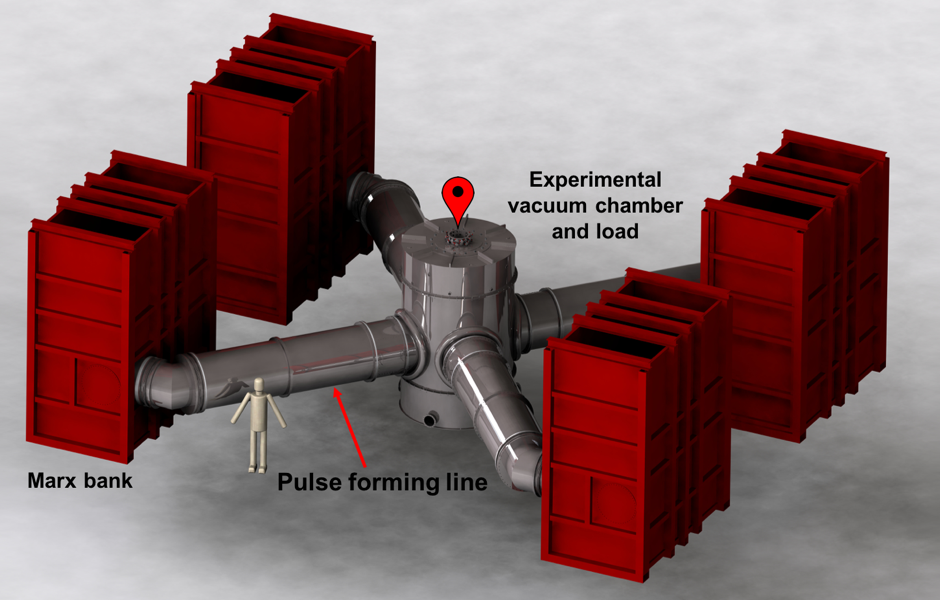 Figure 1: MAGPIE machine. The red boxes are the capacitor banks, the central column is home to the experimental vacuum chamber where all the exciting experiments happen and the cartoon man gives you a sense of the scale of the MAGPIE machine.

MAGPIE works by discharging four large capacitor banks through a small load. The capacitor banks charge up to 65 kV and discharge ~ 2 MV (~ 2 million volts) – knowing that the voltage of your mains socket at home is only 240 V, the amount of voltage in MAGPIE is substantial. Consequently, 1 million amps of current is released from these banks in approximately 240 nanoseconds – that equals 240 billionths of a second. As a result, MAGPIE generates approximately 1 terawatt (1 with 12 zeros) of power – more than the average power output of the UK National Grid.

For some of the experiments carried out on MAGPIE, this large amount of current is passed through aluminium wires as thin as a strand of hair. When this happens the wires vaporise and turn into plasma. All that current heats up the aluminium wires so much that the element can’t keep itself together, which means that atoms can’t exist anymore. What we are left with in the experimental chamber is a violent body of whizzing electrons and ions – a plasma.

This ‘space-maker chamber’ is only about a meter in diameter. It is put under vacuum so we can recreate the conditions of space accurately and to prevent air particles from influencing the plasma and causes it to cool down, thus ruining the experiments.

If you were to be in close proximity to MAGPIE when we carry out an experiment you’d hear a mixture of sirens, see flashing lights and hear a large “Bang” when an experiment ‘shot’ is fired – to be safe, it is necessary to wear ear protectors.

MAGPIE researchers can model astrophysical jets that are seen around black holes and supernova explosions. Scaling laws are used to create a fast and small experiment to astrophysical scales with long timescales and large distances. This field of science is known as laboratory astrophysics. Working on MAGPIE is such a privilege as you get to recreate the amazing phenomena of space in the lab and understand more about the incredible Universe we live in.

This article has been adapted from Meriame’s MSci Laypersons Summary. 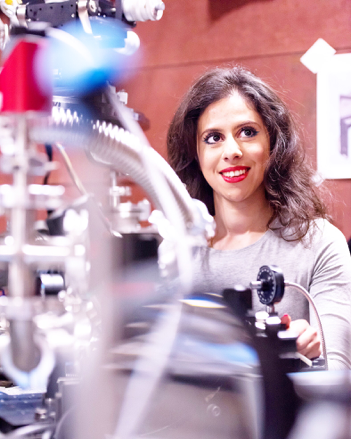 I am a fourth year MSci physics student currently working on MAGPIE where I hope to find out more about the interaction of two bow shocks by watching plasma created in MAGPIE flow around different targets. I am also a young science communicator, promoter of women in physics, young face of fusion 2016, blogger and Science Mixtape producer. You can find out more about me and what I do on my website here: www.meriameberboucha.weebly.com